If you have ever considered opening your own Snowie stand, or if you just want to know more about it, here’s a great article on Snowie featured in Business Leader Media’s Opportunity World Magazine. 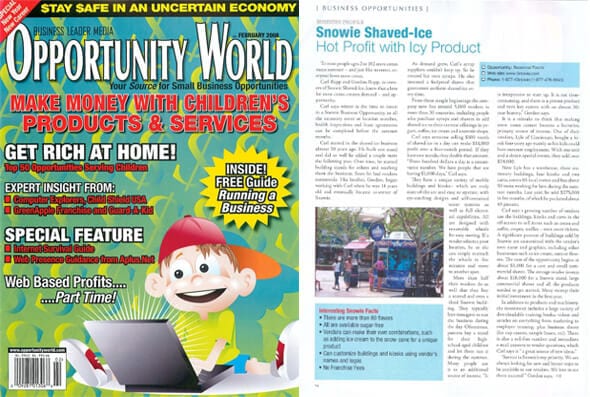 To most people ages 2 to 102 snow cones mean summer – and just like summer, everyone loves snow cones.

Carl says winter is the time to invest in a Snowie Business Opportunity, so all the necessary event or location searches, health inspections and lease agreements can be completed before the summer months.

Carl started in the shaved-ice business almost 30 years ago. He built one stand and did so well he added a couple more the following year. Over time, he started building stands For others and teaching them the business. Soon he had vendors nationwide. His brother. Gordon, began working with Carl when he was 14 years old and eventually became co-owner of Snowie.

As demand grew, Carl’s syrup suppliers couldn’t keep up. So he created his own syrups. He also invented a fool proof shaver that guarantees uniform shaved-ice every time.

From those simple beginnings the company now has around 5,000 vendors in more than 30 countries, including people who purchase syrups and shavers to add shaved-ice to their current offerings in yogurt, coffee, ice cream, and souvenir shops.

Carl says someone selling $300 worth of shaved-ice in a day can make $18,000 profit over a Four-month period. If they have two stands, they double that amount. Three hundred dollars a day is a conservative number. We have people that are having $1,000 days, Carl says.

They have a unique variety of mobile buildings and kiosks- which are truly state-of-the-art and easy to operate, with eye-catching designs and self-contained water systems as well as full electrical capabilities. All are designed with removable wheels for easy moving. If a vendor selects a poor location, he or she can simply re-attach the wheels in five minutes and move to another spot. More than half their vendors do so well that they buy a second and even a third Snowie building. They typically hire teenagers to run the business during the day. Oftentimes, parents buy a stand for their high school-aged children and let them run it during the summer. Many people use it as an additional source of income. “it is inexpensive: to start up. It is not time consuming, and there is a proven product and turn key system with an almost 30-year history,” Gordon says.

It is a mistake to think that making snow cones cannot become a lucrative, primary source of income. One of their vendors, Lyle of Cincinnati, bought a kiosk four years ago mainly so his kids could have summer employment. With one unit and a dozen special events, they sold over $24,000.

Now Lyle has a warehouse, three stationary buildings, four kiosks, and two carts, covers 65 local events and has about 50 teens working for him during in the summer months. Last year, he sold $275,000 in five months, of which he pocketed about 40 percent.

Carl says a growing number of vendors use the buildings, kiosks, and carts in the off-season to sell items such as cocoa and coffee, crepes, waffles – even event tickets. A significant percent of buildings sold by Snowie are customized with the vendor’s own name and graphics, including other businesses such as ice cream, nuts or flowers. “The cost of the opportunity begins at about $3,000 for a cart and small commercial shaver. The average vendor invests about $18,000 for a Snowie stand, large commercial shaver and all the products needed to get started. Many recoup their initial investment in the First year.

In addition to products and machinery, the investment includes a large variety of downloadable training books, videos, and articles on everything from marketing to employee training, plus business sheets (for cup counts, sample leases. etc). There is also a toll free number and immediate e-mail answers to vendor questions, which Carl says is “a great source of new ideas.”

Service is Snowie’s top priority. We are always looking for new and better ways to be available to our vendors. We love to see them succeed!” Gordon says.

You can download the entire article by clicking the link below:

This site uses Akismet to reduce spam. Learn how your comment data is processed.

☀️ we’re the #coolestpartofsummer!
🍧 home the world’s best shaved ice!
👇 learn more at the link below!

Cowboy hats off and a huge Snowie cheers to everyo

SCHOOL’S OUT FOR THE SUMMER! 🎶 And that means

From baseball games to birthday parties, our Flavo

Big smiles outside the Snowie bus! 😎 Did you kn

They teach us, they love us, and best of all, they

Thanks to everyone who attended the Snowie Summit

What was Lyle thinkig!?!

Turning regular kids into (snow) angels on the dai