Wow, this is cool.  We have had shavers show up on two prime time shows this summer: 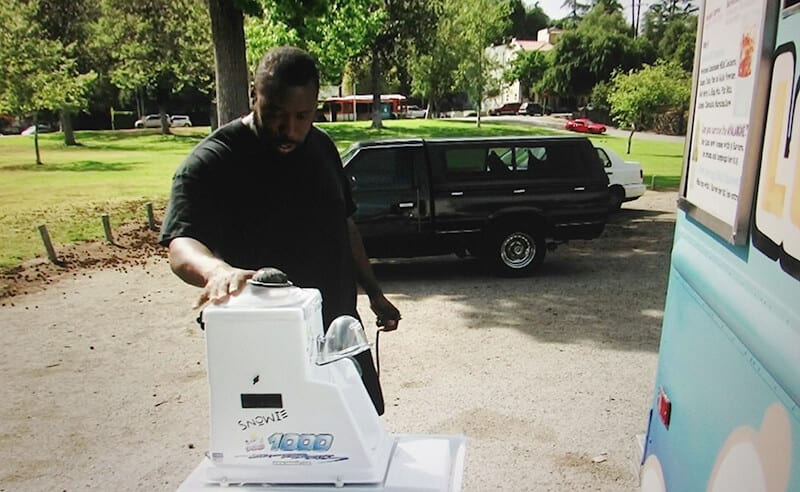 In order to find its value, Ivy takes the Snowie 1000 Ice Shaver to a guy that runs a mobile Shaved Ice truck, I believe his name is Shawn.

It is a fun episode as we watch the guy learn how to initially use the shaver.  He knows some information about it, and shares that the shaver can do 15 shaved ice per minute.  “You just need a steady supply of ice cubes and then you’re good to go man.  It’s real easy!”

“All you gotta do, is put the cup with this cradling plastic here, so that you don’t lose any ice, because ice is money.  Just turn in on like this… and it shoots you in the chest (laughter).”

“all right, so this little hooded part is so that you can shape the ice.”

Ivy then takes a crack at it and does pretty good shaving his first shaved ice.

When Shawn was asked what the machine was worth, his reply was, “Well, this machine is definitely worth more than whatever you paid for it, because to me, it’s just a money making machine.  I would say it’s worth an easy $1500.”

It is great to hear that opinion come from a random guy on Television.  We have often referred to our shavers as money making machines as well, because they are so fast, so reliable, and so great at creating Shaved Ice.  These Ice Shavers have literally changed how shaved ice is done.

Some more of the episode description is as follows:

The buyers take over Stanton, CA. Darrell gets himself banned from one of the auctions.  Ivy Calvin freezes out the competition with a cool machine.  Jarrod and Brandi find themselves flipping for a dancer.  And Barry goes to the auction undercover…but will he be able to keep up the act?

Want to find out how Snowie will pay to flavor you

Want to know the more about the Snowie Summit? Com

Its time for EARLY BIRD REGISTRATION for the 2023

We bring the happiness. ☀️

Cowboy hats off and a huge Snowie cheers to everyo

SCHOOL’S OUT FOR THE SUMMER! 🎶 And that means

We love being a part of your summer and seeing you

From baseball games to birthday parties, our Flavo

Big smiles outside the Snowie bus! 😎 Did you kn